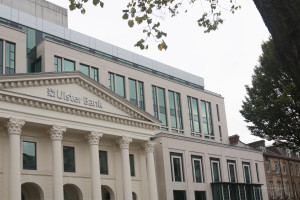 Situated in Donegall Street  Belfast in the heart of the city centre the Ulster Bank head office is a truly impressive building.The portico entrance was designed by Isaac Farrell and was originally part of a Methodist Church that once stood on the site. This part of the building is listed & dates back to c.1846.

The main body of the building was constructed as the head office for the Ulster Bank & comprised 10,473 sq ft of floor space over 7 storeys and became fully operational in 2000.
The building was clad with high quality Portland limestone in a honed finish, the quality mirroring the retained facade. It is of course just as important when designing the facade not only to select the right quality of natural stone but to ensure that the fixing system is of the same quality. Unfortunately over a relatively short period of time the fixing system for the stone cladding gradually started to fail and eventually it became apparent that the cladding would need to be replaced.
Eclad were consulted as stone specialists and asked to submit proposals. With the huge financial & customer service implications it was important that the Bank’s head office remained fully operational during the replacement of the facade.
Eclad engineers fully surveyed both the structure and each individual stone & recommended using their ESV & ESW systems to install 30mm Portuguese Moleanos hard limestone as the optimum solution.
Working with the Main Contractor McLaughlin and Harvey, Eiregramco totally replaced the facade to the agreed programme out of normal hours allowing the Bank to remain fully operational throughout